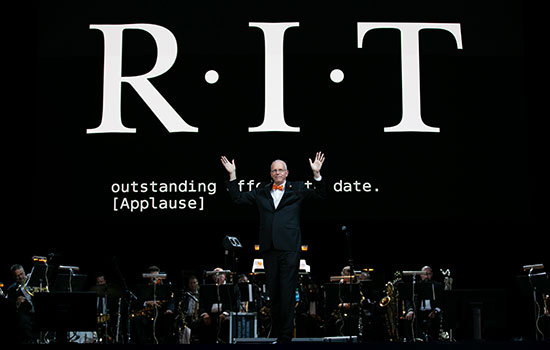 RIT displayed its signature blend of arts and technology Thursday in an evening of entertainment centered on a major announcement about the university’s future.

The campaign is unique in that it’s blended, meaning RIT is seeking support from a variety of investors, including alumni, government and corporate partners, and research foundations and agencies.

The campaign, titled Transforming RIT: The Campaign for Greatness, “will allow us to build upon our updated strategic plan, engage alumni, grow our status as a Top 100 research university and build deeper relationship with our government and corporate partners,” Munson said.

“We are honored to give back to RIT—a community that has fueled the imaginations of each of us,” Judson and Surace said. “Students’ remarkable stories, with their messages of innovation, progress, vitality and intellectual energy remind us of our founding mission and foretell the promising future of this unique university.”

The campaign, which has raised more than $530 million since 2013, “impacts every area of the university,” Munson said, focusing on supporting four priorities:

The Wards, whose son James graduated in May with a degree in software engineering, performed favorites such as “’S Wonderful” and “I’ve Got You Under My Skin” before the cheering crowd.

Henry, who has established herself as one of the world’s most acclaimed vocalists, entertained the audience with classics like “Don’t Cry Out Loud,” and “I am Changing” from the Broadway musical Dreamgirls.

Katie Linendoll ’05 (information technology), an Emmy-winning TV personality and consumer tech expert, served as a co-host with Surace. Linendoll highlighted many of RIT’s nationally ranked programs, including the School of Film and Animation and RIT’s Center for Computational Relativity and Gravitation.

Bubble Boy, a short film created by Tang Tao ’13 (MFA, film and animation) delighted the crowd. The film tells the story of a lonely boy trying to get a girl’s attention in an anti-physics universe where everyone lives on a separate planet.

Jonathan Kruger, chair of RIT’s Department of Performing Arts and Visual Culture in the College of Liberal Arts, conducted an original score he created for the internet TV show Star Trek Continues.

But the highlight was the campaign announcement, which was made in a humorous skit playing off of The Wizard of Oz, starring Munson as the Wizard of Bricks. The skit included cameos by former RIT presidents Bill Destler and Albert Simone, as well as Munson’s wife, Nancy, and campaign chair Judson.

Austin McChord ’09 (bioinformatics), whose $50 million is the largest donation ever made to the university, also joined the fun before talking about why he is investing in RIT’s future.

McChord’s gift, which is counted in campaign money already raised, will help launch the Maker Library & Innovative Learning Complex of the Future, a new facility connecting RIT’s Wallace Library and the Student Alumni Union, and will advance RIT’s cybersecurity and artificial intelligence capabilities.

The campaign also has helped fund the Gene Polisseni Center, NTID’s Sebastian and Lenore Rosica Hall and a new state-of-the-art building for MAGIC Spell Studios, which is scheduled to open this fall.

William Kruszona ’77 (mechanical engineering) said RIT has undergone a transformation he never could have imagined when he was a student. He is proud to be a graduate and is excited for the future of his alma mater.

“The announcement of the goal for a $1 billion almost seems impossible,” Kruszona said. “But I have no doubt it will be met.”

Sonya Haynes ’04 (MS, human resource development) said she thought the evening was fabulous, especially because the event highlighted aspects of RIT that people may not know about.

“This was such a terrific way to present something that RIT is looking forward to growing in the future,” she said.

Sevinc Turkkan, a faculty member in the University Writing Program, College of Liberal Arts, said she was never a student at RIT, but after attending the gala, she wishes she was.

“Over the past few years, I have witnessed unprecedented growth at this university, and I’m proud to be affiliated with it,” she said. “I wish the university well in reaching its goal.”

Munson said the goal is to continue the decades-long Transformation of RIT, building on traditions of excellence and shaping the future.

“We have big ideas and even bigger goals. We will strive to raise nearly $500 million in the next four years, and we’ll need lots of help to get there.”

For more information on the blended campaign, go to www.rit.edu/TransformingRIT. 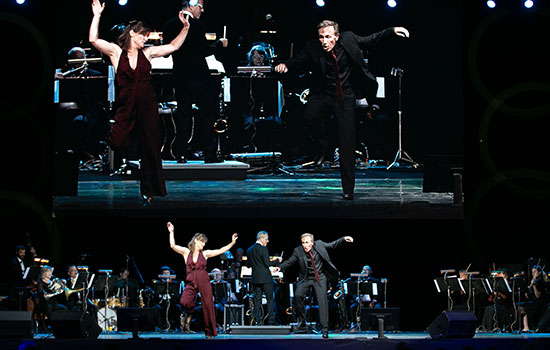 Beverly and Kirby Ward tapped to Broadway favorite â€œâ€™S Wonderfulâ€ to a standing ovation during the RIT Celebration of Music, Art and Technology. Mike Bradley 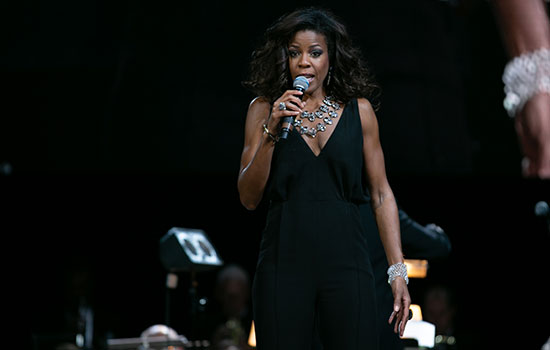 Acclaimed international vocalist Nicole Henry thrilled the audience with show tunes and jazz favorites. She was backed up by Kevin Surace, RIT alumnus and trustee, and a 27-piece orchestra. Mike Bradley 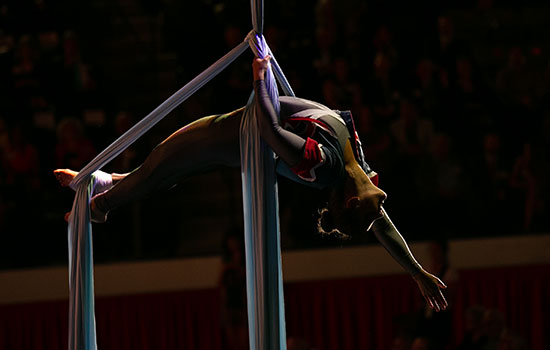 Local aerialists and RIT alumni Jennifer ’08 and William ’08 Dovidio amazed the audience of nearly 2,000 guests as part of the Celebration of Music, Art and Technology. It opened the sequence bringing to mind The Wizard of Oz. Mike Bradley 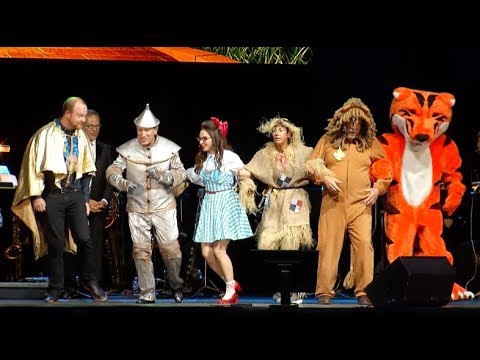